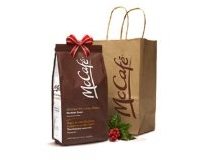 The coffee will be packaged in 12-ounce bags and single-cup portions, which include K-cups for Keurig Green Mountain Inc's popular brewers. Pricing was not disclosed.

The companies in October 2013 announced that they were testing McCafe grocery sales in the United States.