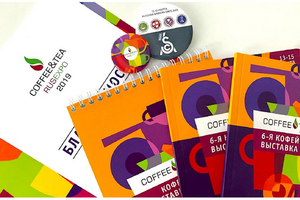 Coffee & Tea Russian Expo, the 6th Russian exhibition and conference of coffee and tea, was successfully held in Moscow

This time Coffee & Tea Russian Expo (CTRE) was held in the new, more spacious Pavilion No. 4 of the Sokolniki Exhibition and Convention Center, on March 13-15. The CTRE attendance record was broken again: the number of guests was more than 6,000 people. More than 160 exhibitors, sponsors and partners took part in the exhibition. During the conference, more than 150 events were held: seminars, workshops, presentations, meetings, lectures and tastings. More than 130 speakers made their speeches at 10 educational platforms (Cacao Russian Expo: bean-to-bar, Coffee&Tea Lab, Coffee&Tea Practicum, Coffee&Tea Talks, Business Case, Roasting Factory, Tea Journey, Drinks Hub), and 6 coffee and 4 tea championships were held in parallel, with more than 80 volunteers helping.

And the winners are:

The Best barista of the year according to "Coffee and Tea in Russia" magazine - Maxim Sekterev, Tasty Coffee;

The Best roaster of the year according to "Coffee and Tea in Russia" magazine - Oleg Zhiltsov, Tasty Coffee.

We also congratulate the participants of the Moscow qualifying round in Latte Art, who will perform at the Russian championship:

Tea Masters Cup Russia Championship pleased the guests with the creativity of the participants. The competition was held in four separate categories, prizes were distributed as follows:

On March 14, during a private reception, the names of the representatives of the coffee and tea professional communities of Russia who were awarded the honorary title Person of the Year 2018, were announced in a solemn atmosphere. The winners of the annual competition Packaging of the Year in tea and coffee industries were also awarded.

The best representatives of the tea and coffee industries fought for the honorary title "People of the Year 2018", and the best of the best were chosen:

- The Person of the Year in the tea industry 2018 - Nikolai Dolgii, Orimi Group of Companies - for winning Tea Masters Cup world championship in Tea Tasting category.

- The Person of the Year in the coffee industry 2018 - Mikhail Yanchenko, Mikale,  RusKomplektTorg Group of Companies - for his long-term contribution to the development of the Russian coffee market, popularization of coffee and on the occasion of the 20th anniversary of the company.

In the contest Packaging of the Year 2019, the winners are:

- The most workable packaging for coffee - the brand and the company Chokocat;

CTRE 2019 was organized by “Coffee and Tea in Russia” magazine with the support of the Russian Association of Tea and Coffee Producers.

Photos of the event can be viewed on social networks:

Please enter your username or email address. Instructions for resetting the password will be immediately emailed to you.