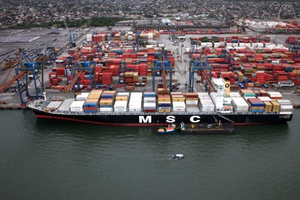 The port of Santos has increased its market share of Brazil’s coffee exports to a new record-high of 87.1 percent in the first half of 2017. This equals to 16.9 million bags, or 1 million tonnes or 36,722 TEU.

Rio de Janeiro was the second-largest port for Brazilian coffee exports in the second half, with a share of 9.2 percent, followed by Paranagua with 1.5 percent, according to the Brazilian Coffee Exporters Council (CECAFE).

The United States is the largest destination for Brazilian coffee, importing 6.4 million bags, or 21,333 TEU, which makes up 19.5 percent of Brazil’s total coffee exports, according to CECAFE.

The market share gains came, while Brazilian coffee exports fell 8.4 percent to 19.4 million bags, or 1.2 million tonnes, according to CECAFE.

Coffee export traffic at Santos declined 2 percent year over year, but that was a slower rate of decline than that recorded at other coffee-exporting ports such as Rio de Janeiro, Paranagua, and Itaguai.

Nelson Carvalhaes, the president of CECAFE, said logistics at the port of Santos have improved significantly in recent years, although there was still room for improvement, especially with road access.

Those improvements will become all the more critical given the performance of Brazilian coffee exports in recent years and expectations of growth.