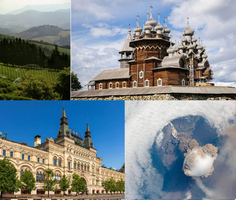 Weird and wonderful things to see on a Russian river cruise

The area around Sochi is home to the world’s most northerly tea plantation, possible because of clement conditions on the Black Sea coast. A visit includes a lecture on the peculiarities of tea in Russia, and a tea party in an ibza, and a history of tea in the country, and a tea-party in a Russian wooden izba (a rural wooden house).

Russia's attractions may well seem esoteric to the British traveller, but there is a constant allure in the world's largest country, especially travelling on its waterways, which allow visitors to move at a relaxed pace its notorious roads may not allow. Here is our pick of the oddities you can find en route.

This island on Lake Onega is home to a collection of restored 18th-century wooden buildings, including the Church of the Transfiguration, which has 22 domes reaching a height of 37 metres. It was built without nails, on the site of a previous church burnt down by lightning.

Cruises between the Russian capital and St Petersburg often give passengers a chance to explore the cities at the beginning and end of their river voyage. Moscow’s GUM Department Store – Glavnyi Universalnyi Magazin, meaning “main universal store” – is an example of one of the Soviet Union’s projects attempting to spread communist ideals through consumerism. Joseph Stalin later converted the department store into an office space, used for plotting his first Five Year Plan. The GUM is today a shopping mall.

This uninhabited volcanic island in the Sea of Okhotsk, in the remote has some of the most active fumaroles in the string of the Kuril islands, in this remote part of the north-west Pacific Ocean. There have been more than 14 documented eruptions in the past 250 years. Visitors here learn about the military base that the Japanese set up here during the Second World War, and how soldiers used geothermal heat from the volcano to keep the runway usable even in the freezing winter months.