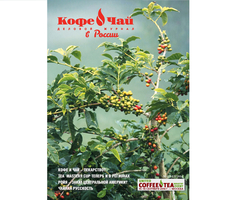 Tea Masters Cup is in the regions. After the first National Championship Tea Masters Cup, held in September last year as part of UCTIE 2013 in Moscow which caused great interest among tea professionals, the preparations for the second Championship has begun with the regional rounds - in the Siberian ( March 21,2014 , Tomsk) and Central Federal Districts (March 24-25, 2014 , Moscow) . Participants competed in three categories: Expertise brewing tea (Tea Brewing), composition of tea (Tea Set), Expertise tasting tea (Tea Tasting). About how these events have passed you can read in the issue.

is Roya the decline of Central America ? Lake Atitlan , Guatemala. Already on the second day the traveler’s ear begins to remark often sounding "la Roja" from a leisurely conversations of local farmers. Today's topic of Roya replaces the usual topics of Guatemalans ‘conversations, reconciles disputants and fills involuntary pauses in dialogues. What natural phenomenon we are dealing with, what the extent of the impact of Roya on the Guatemalan coffee, is there any light in the end of the tunnel… all these and others questions are covered in the author’s article.

Get to know the latest news and interesting facts about coffee and tea in the world!

The magazine has been published since 1997. Subscription is to any publication.